England have lost to defending champs Australia in the first game of the Rugby League World Cup in Melbourne. The Aussies trashed them 18-4 despite both sides being just six points adrift in the last five minutes. 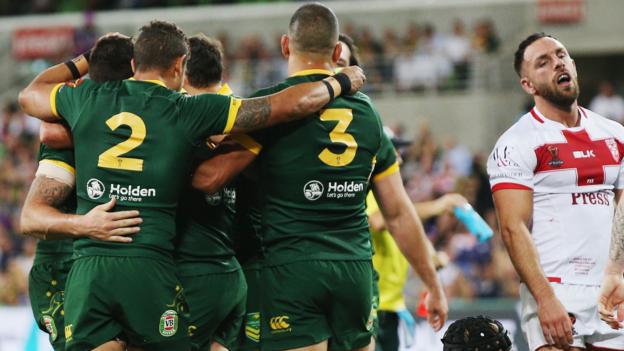 Cameron Smith was the player that sunk the English team further by scoring a crucial penalty. The game was the perfect start to the tournament even as England were below par. Josh Dugan added some late drama when he scored an interception try in the last minute.

Jermaine McGillvary helped England start well after latching onto a Gareth Widdop high pass. He touched down for the first points only after four minutes. The English side held the attacking Australian side up to the 24th minute before Matt Gillett’s power run. England were more of a threat in the second half.

South Sydney Rabbitoh prop Sam Burgess got injured in the first half. It seems his right knee would stop him from featuring further in this tournament. The assistant coach Denis Betts says it would be until the last four before the player would be able to return for England.

England reached the last four in 2013 before the New Zealand side knocked them out. The Aussies were not as dominant but the scoreline says otherwise. McGillvary’s early try was a silencer and it took time before Australia could respond through Gillett and Slater.

England tried limiting the damage but Wayne Bennett’s side could not do much against the unrelenting Aussies. McGillvary opines that the performance was way better than their Four Nations loss of 36-18. For Coach Mal Meninga, he took his tally to eight games unbeaten.